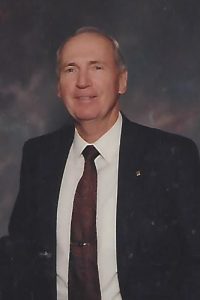 William married Isabel Remy December 28, 1946 in Indianapolis and they moved to Marissa, Illinois in 1948. She preceded him in death in 1996 after a strong and loving 50-year marriage. He married Louise Bourbonnais Fredette in 1997 and they enjoyed loving companionship until her death in 2008.

All who came in contact with William were influenced by his unassuming sense of values, deep and abiding faith, civic pride, patriotism, compassion for others, and a deep sense of responsibility, especially to youth. He lived out those values through serving his country as a WWII Army Air Force veteran, his long time involvement in the Boy Scouts or America at both a local, council, and national level, his participation in numerous civic organizations, and his long and varied service to the First United Methodist Church of Marissa. His encouragement, generosity, and mentoring through both his volunteer and professional activities often helped others to reach high potentials and levels of success.

Mr. Norton had a long and significant history of service with the Boy Scouts of America and he lived his life in accordance with the words of the Scout Oath. William started as a youth member of the BSA and had nearly 80 years of continuous membership and service to that organization. He received a 75-year Scouting Veteran Award in 2011. He was an Eagle Scout and a recipient of the Silver Beaver Award – the highest honor awarded to a volunteer member. At the local level he served as Scoutmaster and Explorer advisor for more than 25 years and impacted more than 1000 youth from the Village of Marissa – many reaching the rank of Eagle scout themselves. Many of his past scouts have stayed in touch with him and praise his influence in their lives and achievements. William served in many capacities for the Council Board including, president, treasurer, and national delegate. At the time of his death, he was still a member of the Executive Board of the Lewis and Clark Council.

William enjoyed a variety of recreational activities and loved the companionship of friends and family on the golf course. His good humor and consistent play made him a sought-after partner in tournaments and as a teacher of the game to his grandsons. He was a prior club champion at the Marissa Golf Course and was a prior Southern Illinois Golf Association senior champion.

Upon receipt of his honorable discharge from the Army Air Force, William attended Butler University and then joined his father in the development of Mid-Continent Coal Corp. as the business manager of Green Diamond mine in Marissa. He later began a career in the finance and banking industry, serving as Vice President and Treasurer and on the Board of Directors of First Federal Savings and Loan (later Charter Bank) of Sparta until the time of his retirement.

In lieu of flowers, memorials may be made to the First United Methodist Church, Marissa, Marissa Recreational Area Association, or the Lewis and Clark Council of the Boy Scouts of America.

Funeral: Services will be held at the First United Methodist Church in Marissa, IL on Tuesday, August 18, 2015 at 11:00am with Rev. Dr. Donald Wagner officiating.

Interment: Burial will be held at Crown Hill Cemetery in Indianapolis, IN on Wednesday, August 19, 2015.