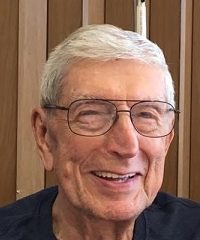 William E. Schreiber, Sr., 89, of New Athens, IL, born April 7, 1931 in New Athens, IL, passed away on Monday September 14, 2020 at Cedar Trails Senior Care in Freeburg, IL. Bill was the original St. Clair County ESDA coordinator and was the New Athens Township supervisor for 35 years.  Bill was a Knights of Columbus member, an avid golfer and St. Louis Cardinals fan. He honorably served his country during the Korean War in the U.S. Army and is a Bronze Star recipient.

Mr. Schreiber was preceded in death by his parents; Alfred A. and Mildred (Germain) Schreiber, his beloved wife; Betty A. (Schaller) Schreiber, who he married on August 8, 1953 in New Athens, IL and who preceded him in death on September 10, 1998, 1 son Nick Schreiber and 1 brother, George Schreiber.

The Schreiber Family wishes to extend their most heartfelt thanks to the staff at Cedar Trails for the excellent care he received during his 3 year stay and very warm wishes to the residents and staff for making him feel welcome.

Memorials in Bill’s honor may be made to St. Agatha Parish.