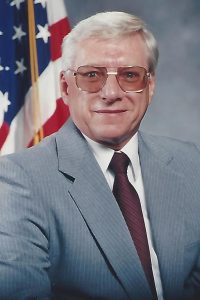 William “Bill” Dennis Coulson, of Marissa, IL; was born on the 18th of September 1937, Tilden, Illinois. Died Sunday on the 24th of May, peacefully at home surrounded by love ones. Bill was preceded in death by his father, William Coulson of Marissa, his in-laws Earl and Marie Harriman of Marissa, granddaughter Jamie Marie Coulson of Virginia and his brother in-law Norman “Butch” Harriman and sister in-law Becky Harriman both of Marissa.

Bill graduated High School from the Marissa High School in 1955 and from Southern Illinois University Edwardsville with a degree in Bachelor of Science specializing in Electronic Engineering in 1971. Bill was in active duty for the United States Air Force from 1954 – 1955, Active duty United States Navy 1955 – 1959 and 2 years in the Navel Reserves. Bill worked at McDonald Douglas on the Gemini Space program as well as the F-4 Phantom Fighter Jet before joining the U.S State Department in 1974. Bill served at the American Consulate in Frankfurt, Germany for 3 years before returning to Washington D.C. After leaving the State Department, Bill joined the Central Intelligence Agency as well as the Federal Bureau of Investigation in 1985 where he retired in 2000.

Memorials may be made to Hospice of Southern Illinois or Wounded Warriors.

Funeral: Services will be held at the Marissa Presbyterian Church in Marissa, IL on Thursday, May 28, 2015 at 11:00am with Rev. James Ryan officiating.