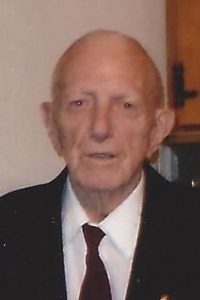 Wilford John “Bebe” Frech, 96, of Fairview Heights, IL was born on August 1, 1917 in Lenzburg, IL, passed away on Thursday, December 19, 2013 at Freeburg Care Center in Freeburg, IL. Mr. Frech was a laborer for the American Water Company. He had 55 years of service in Laborers’ Local 101. He was a member of Holy Trinity Catholic Church in Fairview Heights, IL. Mr. Frech was a World War II United States Army veteran serving in the Battle of the Bulge and the North African and European Campaign.

He is survived by his brother – Leroy (June) Frech of Marissa, IL.

Memorials may be made to Holy Trinity Catholic Church.

Funeral: Services will be held at Heil-Schuessler Funeral Home in New Athens, IL on Monday, December 23, 2013 at 10:00am with Father Ray Schultz officiating.

Entombment: Entombment will be held a Lakeview Memorial Cemetery in Fairview Heights, IL.