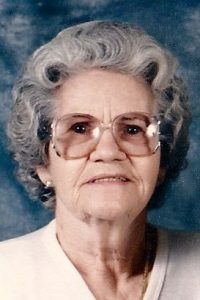 Mrs. Coke was an excellent cook and baker and worked at many local restaurants as well as the Marissa Elementary School. She was also a talented carpenter who remodeled several homes and two churches. Wanda was a member of the First Baptist Church of Clarmin where she taught Sunday school, bible study and children’s choir. She enjoyed singing and belonged to the RSVP singing group at SWIC. Wanda loved to bowl and belong to several leagues over the years.

She was preceded in death by her parents – Aaron and Pearl, nee Ramsey, Cathcart. Her husband – Theodore Coke whom she married on April 14, 1938 in Marissa, IL and who passed away on February 25, 1987. One daughter – Charlotte Coke-McGuire. Nine brothers, two sisters, two grandchildren and two great-grandchildren.

Memorials may be made to the First Baptist Church of Clarmin.

Funeral: Services will be held at Heil-Schuessler Funeral Home in Marissa, IL on Wednesday, December 10, 2014 at 1:00pm.