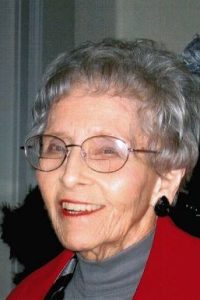 On December 20, 1941, Virginia was united in marriage to Albert G. Yearman in Perryville, Missouri and to this union two girls and one boy were born. Virginia worked as a full time mother and was devoted to her husband. Virginia enjoyed maintaining the home and was a master on the riding lawn mower. She and Albert were very proud of their yard and it showed.

Virginia was preceded in death by her parents; one sister Faye and husband William Rody, one brother, Floyd Chappell and wife Helen, and one great grandchild, Karolina Gonzalez-Saladin. Virginia is survived by her husband of 73 years, Albert Yearman of Willow Springs; her three children, Janette Yearman and partner Robert Schweid of Melbourne, Florida, Kathyrin Bohemier and husband Robert of Willow Springs, Missouri, and Charles Yearman and wife Rita of Mountain Home, Arkansas; eight grandchildren, sixteen great-grandchildren, and three great, great-grandchildren. She is also survived by her sister, Opal Roach of Chester, Illinois and many nieces and nephews.

Visitation will be at the Heil-Schuessler Funeral Home on Monday, December 22, 2014 from 9:00 a.m with the funeral to follow at 11:00 a.m. Virginia will be buried in the Tilden, Illinois cemetery.

Heil-Schuessler Funeral Home in Marissa, IL is in charge of local arrangements with special recognition going to Willow Funeral Home in Willow Springs, MO for their invaluable assistance.