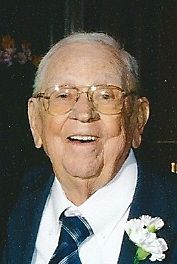 Mr. Hoffman was a farmer. He was a member of the First United Methodist Church of Sparta. Virgil loved the land and was passionate about farming and also enjoyed horses. He was a loving father and grandfather and liked to visit with his family and friends and tell stories.

He was preceded in death by his parents – Alvin and Viola, nee Hake, Hoffman . His wife Catherine, nee Gerling, Hoffman whom he married on October 3, 1942, and who passed away on September 6, 2003; and his sister – Gladys Beek.

Memorials may be made to the First United Methodist Church of Sparta; Tilden Scholarship Fund; Illinois Rural Heritage Museum.

Funeral: Services will be held at the First United Methodist Church in Sparta, IL on Saturday, September 27, 2014 at 11:00am with Rev. Gary Feldman officiating.

Interment: Burial will be held in the North Prairie Cemetery in Hoyleton, IL at 2:30pm.