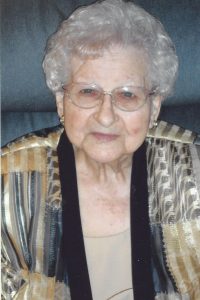 She was preceded in death by her parents – Henry and Adilda, nee Pannier, Lampe. Her husband – Cleo Harriss, whom she married on December 14, 1941 in Belleville, IL and who passed away on June 11, 1974. One son – Allen Harriss and one brother.

Memorials may be made to the New Athens Home for the Aged Activity Fund or to Trinity Lutheran Church Cemetery Fund.

Funeral: Services will be held at St. Paul Lutheran Church in New Athens, IL on Friday, November 7, 2014 at 10:00 a.m. with Rev. John Lukomski officiating.
Interment: Burial will be held at Valhalla Gardens of Memory in Belleville, IL.