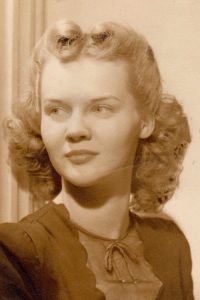 She attended Greeley High School, Upper Iowa University, and the American Institute of Business in Des Moines. She played the clarinet in the band and sang in the choir.

As a young woman, she moved to Iowa City and worked at the Navy Pre-Flight Base, where she met and married Howard Hessick. They moved to Florida and eventually moved to New Athens, where they raised 4 children. She went on adventures and cruises around the country throughout her lifetime; she was a member of the Methodist Church, PTA President and a member of the Woman’s Club. She also worked at the New Athens Journal Press and was an American Legion Auxiliary Past President.

Ronnie was in several bridge groups, was an avid reader, and a gourmet cook. She enjoyed funny movies, roller coasters and walking 4 miles a day.

Ronnie was an extraordinary Mother, Wife, Grandmother, Great Grandmother, Sister, Daughter and Mother-in-law. She was a person of honesty, integrity, faith and moral conviction. She loved her family deeply, and they loved her just as intensely.

Celebrate her life by doing an unexpected and unsolicited act of kindness, or send a donation in her name to The American Diabetes Association.

Visitation: Friends may call at Heil-Schuessler Funeral Home in New Athens, IL on Sunday, July 19, 2015 from 2 to 3 p.m.