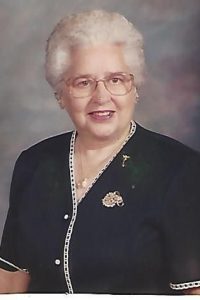 Mrs. Smith was a homemaker. She also worked for a time at the shoe factory on the assembly line. She was a member of St. Paul Lutheran Church in New Athens and the Lenzburg Lions Club, Ruby was also lifelong member of the V.F.W., She loved to sing and belonged to the R.S.V.P. Choral Group.

She is survived by one sister – Mildred (Allan) Schnur of Freeburg, IL. One sister-in-law – Glenda Darnstaedt of Fairview Heights, IL. She is also survived by several nieces and nephews.