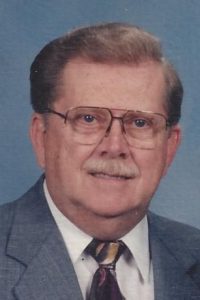 Ronald Ewell Karber, 82, of New Athens, IL, born May 9, 1930 in Belleville, IL died Saturday, October 6, 2012 at Memorial Hospital in Belleville, IL Ron was a retired pharmacist and a member of the St. Louis College of Pharmacy Alumni Association. He was a member of St. John United Church of Christ, New Athens, IL. Ron was a Korean War veteran. He was on the founding board of the New Athens District Library and served for 40 years. He was Past Commander of the American Legion Post 565, Life member of VFW Post 7710, Master Mason of Freeburg Masonic Lodge 418 and past president of the New Athens Lions Club.

He loved to fish and hunt and play cards with his friends.

Mr. Karber was preceded in death by his parents, Henry A. and Leona (Sebastian) Karber.

Surviving him are his wife Marilyn (Eicker) Karber whom he married on March 12, 1955 in New Athens, IL; 2 daughters, Paula L. (Joseph) Swierczek and Renee L. (Charles) Turner and 2 grandchildren, Mackenzie and Donovan Turner.

In lieu of flowers, memorials are encouraged to be made to St. John United Church of Christ or to The New Athens Home for the Aged.

Funeral: Services will be held at 10 a.m. on Wednesday, October 10, 2012 at St. John United Church of Christ in New Athens, IL with the Rev. Dr. Robert Koch officiating. Entombment will be at Valhalla Gardens Mausoleum in Belleville, IL