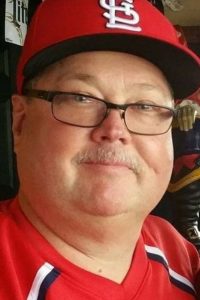 Mr. Nolan was a production associate with XPO Logistics. He was an avid baseball, hockey and racing fan. Bob was also an avid music lover. Most of all he loved watching his son play baseball.

He was preceded in death by his parents – Jack and Mary, nee Votaw, Nolan.

Funeral: Memorial service will be held at St. Peter and Paul Catholic Church in Waterloo, IL on Thursday, January 11, 2018 at 6:30pm.