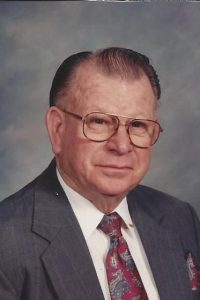 Mr. Martin was a railroad switchman. He was a member of the United Methodist Church of New Athens. He was a WWII United States Navy Veteran. He was a member of Brotherhood of Railroad Trainmen; American Legion Post 58; Collisville Masonic Lodge 712; the Scottish Rite Bodies of Southern Illinois; Served on the Sparta Community Hospital board of directors; Served on the committee restoring Friend of Zion Church on Baldwin Road.

He is preceded in death by his parents Raymond and Dora, nee Gerlach, Martin

He is survived by his wife Barbara, nee Coonrod, Martin whom he married on February 25, 1950 in Sparta, IL. His children – Stephen (Karen) Martin; Michael (Helen) Martin; Kevin Martin. 8 grandchildren; 7 great-grandchildren and 1 great-great grandchildren.

In lieu of flowers memorials may be made to the United Methodist Church of New Athens or to Hospice of Southern Illinois.

Services: Memorial services will be held at United Methodist Church of New Athens on Tuesday, October 23, 2012 at 11:00am with Rev. Ron Chase officiating.

Burial: Interment of cremains will be held at Tilden Cemetery in Tilden, IL.