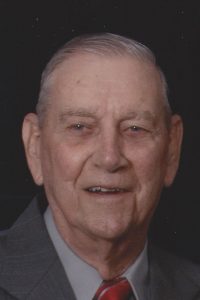 He was preceded in death by his parents – Alvin and Augusta, nee Schmelzel, Lischer. Three brothers and two sisters.

He is survived by his loving wife of 70 years Marjorie, nee Gilmore, Lischer whom he married on March 4, 1944 in Belleville, IL. His children – Norris (Karen) Lischer of Temple, TX; Diane (Bob) Smith of Ballwin, MO. Nine grandchildren and many great-grandchildren . Also survived by nieces and nephews.

Memorials may be made to the First Baptist Church in New Athens, IL.

Funeral: Services will be held at the First Baptist Church in New Athens, IL on Tuesday, July 1, 2014 at 10:30am with Rev. Scott Tyler and Rev. Dennis Felix officiating.