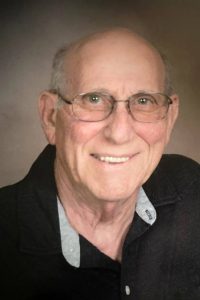 Robert F. Gutjahr, also known as “Bob”, “Goody” and “Bob-Bob”, age 77, of New Athens, IL passed away on December 23, 2021, at Memorial Hospital in Belleville, IL. He was born August 9, 1944, in Lively Grove, IL to Albert and Amanda (Fenner) Gutjahr, He graduated from St. Anthony Catholic Grade School in Lively Grove on June 1, 1958 and went on to attend Okawville High School graduating on May 24, 1962. He served in the United States Army from 1965-1967 being stationed primarily in Alaska.

While celebrating his birthday in 1969 he met Charlotte Haudrich at the old Log Cabin Tavern in Red Bud, IL and they were married at Immaculate Conception Church in Madonnaville, IL on August 29, 1970.

He was an Honorary Life Member of Knights of Columbus Council 3789 and participated in many of the yearly bowling tournaments with his fellow Knights. He belonged to both pool and horseshoe leagues over the years and excelled at both. He also enjoyed playing golf, Euchre, our special marbles board game and Play Nine with family and friends and we will never forget his signature elbow move when he had the winning card in a hard-won marbles game! He was an avid reader of western fiction and could often be found in the evenings sitting in his recliner watching Gunsmoke reruns.

Over the years he was employed at Eckert Motor Company in Lenzburg, Max Brown Equipment Company in Marissa, Zacheis Farm Equipment in Steeleville and lastly Hubbell-Wiegman Company in Freeburg, IL from which he retired in 2011.

Memorials may be made to St. Agatha Parish in the form of masses or to the American Lung Association.