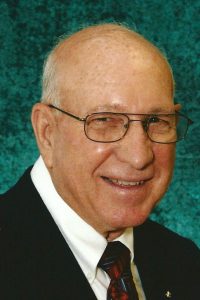 Raymond C. Mulholland, 75, of rural Marissa, IL passed away Wednesday, September 12, 2012 at his home surrounded by family. He was born on the family farm west of Coulterville on February 16, 1937, son of Joe F. and Pearl, nee Hemphill, Mulholland. Ray was a 1955 graduate of Coulterville High School. He was united in marriage to Shirley Hermanns on April 7, 1956 at United Church of Christ in Biddleborn, IL. She survives.
He was a lifetime farmer and dearly loved his family.
Ray was a veteran of the United States Army Reserves. He was a member of the Tilden Presbyterian Church where he served as an Elder and Trustee for many years. Ray was a 50 year member of the Marissa Masonic Lodge #881, Scottish Rites, Ainad Shrine and Randolph County Shrine Club and Eastern Star Amaryllis Chapter #750.
He served on the Board of Egyptian Electric for 30 years and on the Board of Southern Illinois Power Coop.
He was preceded in death by his parents. His father and mother-in-law – William and Norine Hermanns and brother-in-law William McKinley.
In addition to his wife, he is survived by one son Dwayne Mulholland and his wife Lana. Two granddaughters – Dana Fritsche and her husband Wesley and Bethany Borrenpohl and her husband Kenny and on great grandson Rhett Fritsche. Two sisters – Dorothy McKinley and Joan (Claude) Little. Two brothers – Robert (Helen) Mulholland and Leonard (Mary) Mulholland. Brother-in-law – Larry(Shirley) Hermans. Many nieces and nephews and many, many friends.

Memorials: In lieu of flowers memorials may be made to the Tilden Presbyterian Church or the Shriners Hospital.

Funeral: Services will be held at Tilden Presbyterian Church in Tilden, IL on Saturday, September 15, 2012 at 11:00am with Rev. Dennis Hamilton officiating.

Interment: Burial will be held at the Tilden Cemetery in Tilden, IL