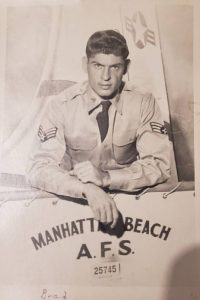 Rayford was a retired correctional officer from the state of Illinois at Menard Correctional Center in Chester, Illinois.  He had also worked as a construction worker on First Baptist Church in Sparta, IL, and on the Kaskaskia River Bridge in Baldwin, IL.  Before that he had worked at a factory in Sparta, IL and at one in New Athens, IL.  In the Air Force, Rayford worked as an electrician on airplanes and as a radio operator at the Nato Base in Naples, Italy.

He met his wife, Melba, at Scott Air Force Base near O’Fallon, IL in February, 1955.  Four months later they married on a riverbank in Smith County, Mississippi.

Rayford loved crop-farming on his 120-acre farm and raising dogs, cattle, sheep, pigs, and goats over the years.  He especially loved hunting in his woods, particularly squirrels,  and fishing in the ponds/creeks on his property.  He also enjoyed gardening, mostly raising corn and tomatoes.

Memorial contributions may be made to Tunnel to Towers Foundation, Fairview Baptist Church Cemetery, or Zion Lutheran Church Ladies Aid.