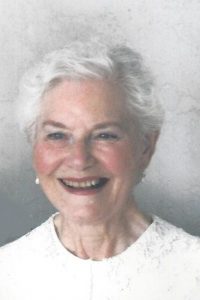 Phyllis S. Mueller, nee Smith, of New Athens, IL, born on September 4, 1929 in Erie, PA, passed away on June 28, 2016 at St. Paul’s Home in Belleville, IL. Mrs. Mueller proudly and honorably served her country as a United States Air Force officer from 1957 – 1963. She was the WAF squadron commander at the Syracuse, NY Air Force Station of the 32nd Air Division in 1958. Phyllis was a 1951 graduate of Greensboro, NC College. She later obtained her MBA from the University of West Florida in Pensacola. After graduation, she worked as a financial planner.

She was a member of St. John United Church of Christ in New Athens where she was active in the Women’s Guild. During her membership, she served on various committees, held offices and volunteered at the CESNA Shop. Phyllis enjoyed playing competitive bridge and other card games. She loved traveling, visiting all 50 states and 20 countries and particularly enjoyed taking cruises.

Phyllis was preceded in death by her parents, Adam and Dorothy Smith, her first husband, Donald Brown of Wilmington, NC and an infant son, Christian Mueller.

In lieu of flowers, memorials are requested to be made to St. John United Church of Christ in New Athens.