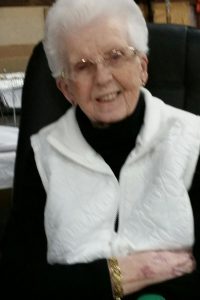 Mrs. Macbeth was a retired jewelry salesperson. She was a member of Friedens United Church of Christ; Sparta VFW Auxiliary 2698 and the Marissa Women’s Club. Patricia was an avid golfer and enjoyed traveling.

She was preceded in death by her parents – Robert and Catherine, nee Hudson, McManus. Her husband – William Macbeth whom she married on July 29, 1970 in Sparta, IL. Her ex-husband – Charles Towey. One brother, Bob and two sisters Helen and Kay. Two sons-in-law – Gary Poling, Greg Hazen.

In lieu of flowers memorials may be made to Friedens United Church of Christ Scholarship Fund or the American Cancer Society.