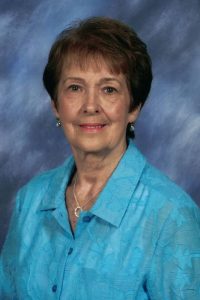 She worked for many years at Cherry Insurance and Hookers Men’s Clothing Store in Sparta.  Pat was a Sparta Bulldog and St. Louis Cardinals fan.  She was a great cook and was famous for her homemade iced sugar cookies.  Family and friends enjoyed those decorated cookies on every holiday and special occasion!  She was a member of the First United Methodist Church of Sparta and was one of the original “Bazaar Girls” as co-chair of the annual Holiday Bazaar.  Pat was also past president of the Delta Theta Tau Sorority.

She was preceded in death by her parents; brothers – Ron Hamilton and an infant brother.

Memorial Contributions may be made to the First United Methodist Church in Sparta, IL.  The family asks that you do an act of kindness in Pat’s memory.

Funeral services will be held at the First United Methodist Church in Sparta, IL on Sunday, October 3, 2021 at 3:00 p.m. with Pastor Randy McGeehon officiating.

Private graveside services will be held for the family immediately following the church service.