Olinda, nee Schenke, Hacker, 95, of Lenzburg, IL; passed away peacefully at home on March 31, 2019.  Linda was born on January 16, 1924 in New Athens, IL to the late Fred and Alma, nee Berthold, Schenke. In 1925 her family moved to Lenzburg. Linda attended Lenzburg Grade School and two years of high school, then finished her last two years at New Athens High School, graduating in 1941. She was awarded the Illinois State Teacher Scholarship and attended Southern Illinois Normal University at Carbondale, graduating in 1944 with a BS in education, her life long dream. 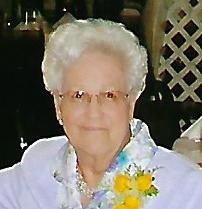 On August 1, 1946 Linda married Warren Hacker of Lenzburg on home plate in Pampa, Texas where Warren was beginning his professional baseball career. On November 4, 1950 a daughter, Pamela, was born bringing great joy. Pam married on November 24, 1973 to David Sutton making a special addition to the family.

She was preceded in death by her husband Warren of 55 years, her parents, Stepmother, Ida Schenke, a brother, Elmer, and a son, David in infancy, special life long friends Ruth Schaller and Virginia Hood.

Surviving are her daughter and son-in-law, Pamela and David Sutton of Lenzburg, IL. Sister-in-law, Dorothy Hacker of New Athens, IL. God child and nephew, Richard (Kathryn) Hacker of Tilden, IL and their children; Roger (Marisa) Hacker of Oakland, CA, and Scott (Jenny) Hacker of Lebanon, IL and Katy Hacker of Fairview Heights, IL Two special nieces; Ruth Ann (Jon) Hanft of New Athens, IL and Jeanne (the late Don) Jansen of Fairview Heights, IL, and their daughter; Laurie (Chad) Gray of Swansea, IL and their children, Evan, Drew, Reece, and Connor, all of Swansea, IL and special friends that were like sons, Lee and Neil Schaller.

“A final thank you to all the students over the years who stopped to talk when we saw each other, it was appreciated and I remembered you all.”

In lieu of flowers memorials may be made to St. Peters United Church of Christ, Lenzburg Fire Department or to Hospice of Southern Illinois.

Funeral: Services will be held at Heil-Schuessler Funeral Home in New Athens, IL on Saturday, April 6, 2019 at 11:00 a.m with Rev. Robert Coffey officiating.  Burial will follow at Oakridge Cemetery in New Athens, IL.