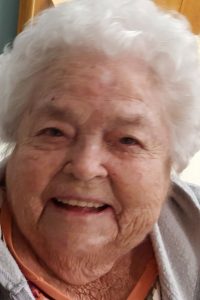 She was preceded in death by her parents – Paul and Olive, nee McKinley, Dickey. Her husband Raymond Sauerwein whom she married on May 29, 1942 in St. Louis, MO and who passed away on March 26, 2008. One brother – Robert Dickey. Two sisters – Fern Mulholland; Doris Goldschmidt.

Memorials may be made to the Marissa Presbyterian Church or to the Coulterville Care Center.

Funeral: Memorial services will be held at the Marissa Presbyterian Church in Marissa, IL on Tuesday, October 11, 2016 at 1:00pm with Rev. James Ryan officiating.

Internment: Burial will be held in the Marissa Township Cemetery in Marissa, IL.