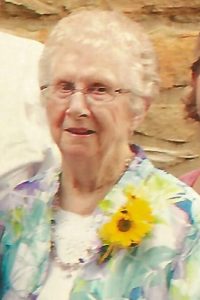 Mrs. Koch was a homemaker. She was a member of St. John’s United Church of Christ where she belonged to the Women’s Guild serving in all offices. She served on the managing board of directors of the New Athens Home for the Aged for 12 years serving as secretary for most of those years. She served on the Auxiliary Board of the New Athens Home for the Aged for many years serving in every office – some more than once. Mrs. Koch was an avid quilter and belonged to the St. John’s UCC Quilters Club. Nelda was a very loving mother and grandmother and loved the time she spent with her family.

She was preceded in death by her parents – Arnold and Ruth, nee Curry, Funk. Her husband Norman Koch whom she married at St. Paul’s United Church of Christ in Belleville, IL on July 3, 1957 and who passed away on June 8, 2011. One son – Larry Koch. One brother – Dean Funk. Two sisters – Sharon Kaemmerer; Sandra Peterson.

Interment: Burial will be held at Darmstadt Memorial Cemetery in Darmstadt, IL.