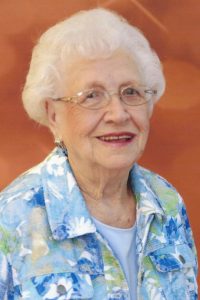 Mrs. Bald was a farmer. She was a member of St Peter United Church of Christ in Lenzburg, IL. She was a lifelong member of the Progressive Grange and was a 4-H leader for many years.

She was preceded in death by her parents – Charles and Amanda, nee Hartel, Schatte. Her husband – Albert H. Bald whom she married on September 14, 1940 in Marissa, IL and who passed away on April 10, 2009. Two brothers – Wilbert Schatte; Walter Schatte. One sister – Arlu Murray.

Funeral: Services will be held at St Peter United Church of Christ in Lenzburg, IL on Wednesday, August 27, 2014 at 10:00am with Rev. Howard Thomure officiating.