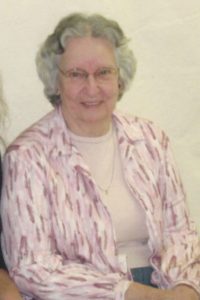 Meridene K. Wilson, nee Hopp, 86, of New Athens, IL, born January 23, 1928 in Belleville, IL, passed away on Friday, January 9, 2015 at the New Athens Home for the Aged in New Athens. She was a homemaker and a member of St. John United Church of Christ in New Athens, IL. Mrs. Wilson and her late husband, “Wib” Wilson, enjoyed being regular attendees at New Athens School Dist. #60 sporting events and band concerts.

She was preceded in death by her husband, Wilbur “Wib” Wilson, whom she married on May 27, 1967 and who died on November 9, 2006, her parents; Lester and Alice (Nadler) Hopp; and her sister, Pauline Hopp who died in infancy.

Memorials in Meridene’s honor may be made to St. John United Church of Christ or to the New Athens Home for the Aged Activity Fund.

Funeral: Services will be held at 10:30 a.m. on Tuesday, January 13, 2015 at St. John United Church of Christ in New Athens, IL with the Rev. Dr. Robert Koch officiating. Interment will follow at Oakridge Cemetery in New Athens.