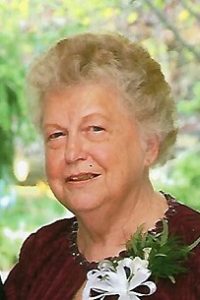 Mary “Lucille” Schmierbach, nee Edgar, 86, of Marissa, IL, born January 3, 1936, in Coulterville, IL, passed away on Thursday, July 21, 2022, at the Coulterville Rehab. & Health Care Center in Coulterville, IL.  She was a homemaker, a member of Friedens United Church of Christ in Marissa, IL and a former Girl Scout leader.  She enjoyed camping and traveling with her family but what brought her the most joy were her grandchildren and great grandchildren.

She was married to Robert Schmierbach on June 25, 1954, in Marissa, IL and he preceded her in death on June 12, 2012.  They were happily married for 58 years.  She was also preceded in death by her parents – Reuben Edgar and Florence (Snodgrass) Edgar, her sister – Pearl Odom Besancon and her brother – Norman “Red” Edgar and sister-in-law – Helen Edgar.

Lucille, as she was known, is survived by her two daughters – Brenda (Rick) Kinzel and Connie Johnson, both of Marissa, IL, Brother-in-law – Edwin Besancon of TN, Grandchildren – Jamie Norman of Washington, MO, Joshua (Emily) Johnson of Aviston, IL, Chelsea (Andrew) Meredith of Crestwood, KY and Les Norman.  Great grandchildren – Aidan and Grady Norman, Samuel and Lucas Johnson, Kyler, McKenzie, Alexis, and Luke Meredith.  She is also survived by her dearest cousin – Joanne Davis and many nieces, nephews, relatives, and friends.

Memorials may be made to Hospice of Southern Illinois or Friedens United Church of Christ in Marissa, IL

Visitation:  Friends and family will be gathering from 9 to 11:00 on Saturday July 30, 2022, at Heil -Schuessler Funeral Home in Marissa, IL

Memorial service:  Services will be held at 11:00 a.m. on Saturday, July 30, 2022, at Heil-Scheussler Funeral Home in Marissa, IL with Rev. Brett Palmer officiating. Burial will follow at Marissa TWP Cemetery.

Heil-Scheussler Funeral Home in Marissa, IL is in charge of arrangements.