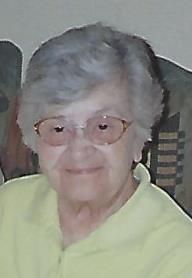 Mary Elizabeth, nee Riley, Franklin, 88 of Marissa, IL passed away Sunday, August 23, 2015 in Sparta, IL She was born April 5, 1927 the daughter of Boyd and Bessie, nee Wright, Riley of Jonesboro, Missouri. She married Floyd H. Franklin on December 30, 1944 in Nashville, Illinois. They were married 70 years. Mary was a homemaker, mother to twin sons, Gary Floyd and Jerry Lloyd Franklin.

Memorials may be made to the Macke Senior Center of Marissa.

Funeral: Services will be held at Heil-Schuessler Funeral Home in Marissa, IL on Thursday, August 27, 2015 at 11:00am with Rev. Wilbur Franklin officiating.