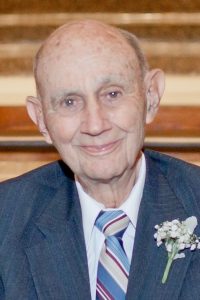 Mr. Hentzel, with his family, operated the International Harvester Dealership and the Chrysler Dealership in New Athens. Later he was an insurance agent with Prudential Insurance Company until his retirement. Marvin was a faithful and active member of St. Agatha Catholic Church. He was a United States Army Air Corps Veteran serving in World War II. Marvin was the last charter member of the New Athens Lions Club. He was a member of American Legion Post 565, New Athens Commercial Club, and board member of the Kaskaskia Water District.

He was preceded in death by his parents – William and Della, nee Huber, Hentzel. One brother – Merle Hentzel. One son-in-law – Alan Schmidt.

Memorials may be made to St. Agatha Parish.