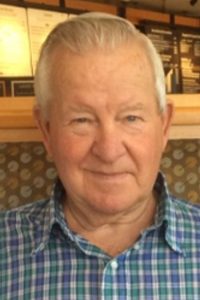 Marlin Dale Albert, 81, of New Athens, IL; born on May 13, 1935 in Freeburg, IL; passed away on Saturday, April 15, 2017. Mr. Albert was a surveyor for Peabody Coal Company for 37 years. He was a graduate of New Athens High School and attended Ranken Technical Institute in St. Louis, MO. He was a member of St. John United Church of Christ in New Athens, IL. He served his country in the United States National Guard. Marlin was a member of the New Athens Sportsman Club, the Illinois Federation of Hunting Dogs and the Illinois Nut Growers Association. Marlin was a great lover of the outdoors and nature. He was an avid fisherman and hunter and had a passion for hunting coyotes. With his wife, Helen, he planted thousands of tree saplings and enjoyed grafting different varieties and placed countless bluebird houses.

He was preceded in death by his parents – Elmer and Luella, nee Feldt, Albert. His stepfather – Ben Deichmann. One sister – Darleen Engel.

Memorials may be made to the New Athens Sportsman Club or St. John United Church of Christ.