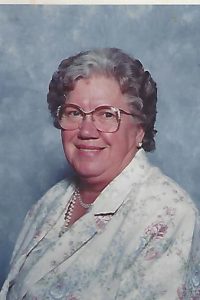 Mrs. Marjorie M., nee McGee, Winkelman, 88, of New Athens, IL, born December 24, 1927 in Marissa, IL, passed away on Tuesday, Janaury 19, 2016 at the New Athens Home for the Aged. Mrs. Winkelman had been an inspector at the shoe factory in Belleville. She also attended St. Peter United Church of Christ in Lenzburg, IL

Memorials in Mrs. Winkelman’s honor may be made to the New Athens Home for the Aged.

Per Marjorie’s request, cremation is to be held with no visitation or services.