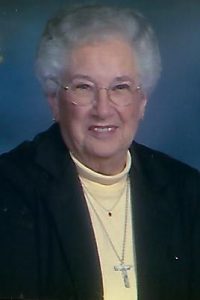 Margaret often expressed that her 6 children were her treasure on Earth.  Her love for them was so strong and sincere, and the same would be said about each of her grandchildren.  She will be remembered for sending handwritten, beautiful and heartfelt messages and cards faithfully to all she knew and loved.

She was an avid reader and often read anything associated with WWII, as she often said she lived through it.  She had many relatives and friends who left and never returned home.  She respected any veteran and felt a deep sense of gratitude for their sacrifices.

She was a member of St. Agatha Catholic Church, extra-ordinary minister and was a choir member for 40 years. She loved praising the Lord in song.  She spent many years serving the Belleville Diocesan Cursillo in Christianity, serving on Cursillo weekends, as well as on the School of Leaders, a member of the Secretariat and the St. Agatha Council of Catholic Women. Margaret’s example of faith and holiness brought many people closer to Christ.

Mrs. Wahlig enjoyed working in her yard and often expressed that whatever beauty came from it was for the Lord’s honor and glory.

Many thanks and gratitude to Margaret’s special friend, Charlotte who was always there for her. Thanks also to Helen and members of her prayer group; Mary, Ann, Marie, Alice and Pat, her special nieces; Doris and Carol, Family Hospice nurse Tamara and all who demonstrated such compassionate and loving care to Margaret in her final days.  There are many dear and beautiful people who helped her in so many ways. You know who you are, thank you!

Mrs. Wahlig was preceded in death by her parents; Fred and Mary Anna (Louvier) Doiron, her husband; George J. Wahlig, Sr, whom she married on June 1, 1946 at St. Joseph Catholic Church in Prairie Du Rocher, IL, and who passed away on February 19, 2001, 1 son; Michael Wahlig who passed away on September 17, 1999 and her 2 brothers and sisters-in-law; Greg (Albertha) Doiron and Earl (Josephine) Doiron.

In lieu of flowers, memorials may be made to St. Agatha Catholic Church in the form of Masses or to Family Hospice.