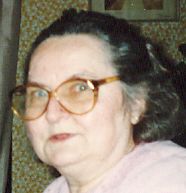 Mrs. Bingel was born on October 20, 1927 in Heidelberg, Germany. She was the daughter of Robert and Magdalena, nee Baust, Ihm. She married Bernard Leo “Bud” Bingel on December 30, 1954 in Mannheim, Germany.

Mrs. Bingel retired from Spartan Printing Company as a bindery worker with 23 years of service.

She was preceded in death by her parents and stepmother – Agnes Ihm. Her son Robert E. Bingel. One brother-in-law – Kurt Wacker of Oftersheim, Germany.

Memorials may be made to the Coulterville Care Center.

Funeral: Services will be held at Heil-Schuessler Funeral Home in Marissa, IL on Tuesday, August 27, 2013 at 10:00am with Rev. Wilbur Franklin officiating.