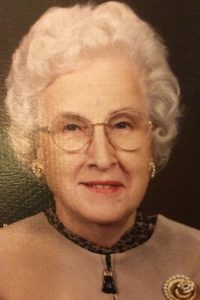 She was born Mabel Johanna Triefenbach December 1, 1919 to Henry and Louisa, nee Sinn, Triefenbach and lived with them, her sister Mildred, and brothers Alvin and LeRoy in Marissa.

Active in high school as a friend and wanted piano accompanist, Mabel was wooed and won by Marissa-bred Irving Schickedanz. They were married in 1944 and had two sons David (Judith) Schickedanz and John (Leah) Schickedanz Barrett. For a time she worked as a hairdresser and at the First National Bank of Marissa, as well as Triefenbach Ford, Inc.

She taught her children and grandchildren by example to praise God, pray, meditate, and be thankful. Patient Mabel lived by Biblical words, “Love is patient, love is kind.”

A talented piano and organ player, she read music and could also play by ear. Mabel last played less than a week before her death at St. Paul’s in Belleville when she performed a rousing rendition of “The Star Spangled Banner”. She played piano and organ at Marissa Friedens United Church of Christ for 74 years and was a choir director for 70. Marvelous Mabel to accompanied music competition youngsters from Marissa, New Athens, and St. Libory for many years.

Growing up and living in Marissa, Mabel and her husband Irving had an affinity for community service and were great with group dynamics. They were in unit in church, music, and scouts. Mabel will always be remembered for her leadership in the Church Council, Friedens Women’s Fellowship, Marissa Kitchen Band, the CIHU (Can I Help You?) group, and Fireside Group.

Her granddaughters will long reminisce about the lessons, lovingly taught them, in the kitchen and making cookies, especially at Christmas time. They knew that Mabel was an amazing cook who had perfected pot roast and chocolate chip cookies.

Perhaps as a child enduring being hit by a car and having a broken leg and pelvis, surviving typhoid fever, and withstanding some hard falls, Mabel could be called tough. Experiences like that gave her determination and strength that helped her live 98 years, 4 months, and 25 days.

Memorials may be made to Friedens United Church of Christ of Marissa.

Funeral: Services will be held at Friedens United Church of Christ in Marissa, IL on Saturday, April 28, 2018 at 11:00am with Rev. Brett Palmer officiating.

Internment: Burial will be held in the Marissa Township Cemetery in Marissa, IL.