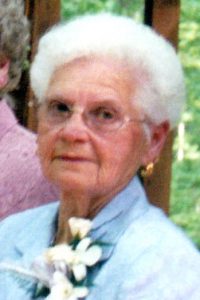 Lorrain Doris (Springer) Macke, 86, of Marissa, born April 11, 1927 in West Alton, MO, died Thursday, February 6, 2014 at the Coulterville Care Center in Coulterville, IL. She was born 1 of 13 children to the late Joseph and Mamie (Malson) Springer. Mrs. Macke was a homemaker. At one time she had been a Girl Scout Leader, a member of Royal Neighbors, Busy Bee, and Business & Professional Women. She was also an avid booster of Marissa Boy Scout Troop 327.

In addition to her parents, she was preceded in death by her husband, Floyd W. Macke, whom she married April 6, 1947 in West Alton, MO and who preceded her in death on February 22, 1983; 1 son; Charles Macke and 1 daughter, Diane Macke.

Memorials may be made to the Marissa Boy Scout Troop 327.

Visitation: Friends may call from 12 to 2 p.m at Heil-Schuessler Funeral Home in Marissa, IL on Monday, February 10, 2014.

Funeral: Memorial services will be held at 2 p.m. at Heil-Schuessler Funeral Home in Marissa, IL on Monday, February 10, 2014. Burial will be at Valhalla Gardens of Memory Cemetery in Belleville, IL