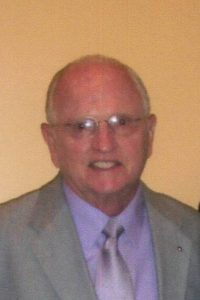 Lloyd was a veteran of the United States Army.  He served overseas from 1954 to 1956.  He was an active member of the Sparta American Legion and the Sparta VFW Post #2698.  Lloyd was also a member of Gideons International and served as an Elder at Trinity Presbyterian Church for a period of time.  He was on Sparta City Council for twenty years and strived to help out the community.  Lloyd loved spending time with his children, grandchildren and cat, Louie.

He was preceded in death by his parents; brother – Carl Appel; sister – Bertha Russell.

Memorial contributions may be made to the Women Association at Trinity Presbyterian Church or the Randolph County Humane Society.

The visitation will be held at Trinity Presbyterian Church in Sparta on Monday, May 23, 2022 from 9:00 to 11:30 a.m. Funeral services will begin at 11:30 a.m. with Rev. Monty Jackson and Pastor Tim McIntyre officiating.  Interment will follow at Caledonia Cemetery in Sparta.  Military honors will be conducted by the Illinois Army National Guard Funeral Honor Detail and the Sparta VFW Post #2698.