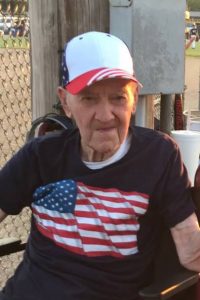 Lloyd grew up and spent most of his life in Tilden.  He went by many nicknames, one being “Trapper” because of his love for trapping wild game.  Not only did he like to trap wild game, but he enjoyed hunting and fishing as well.  One of his other hobbies was arrowhead hunting.  Lloyd would wait for a field to be plowed or a large rainfall before walking a field, searching for arrowheads.  He was a World War II veteran that served in Japan and the Philippines.  When he returned from the service, he picked up a job as a coal miner and worked until retiring.  If you ever drove through Sparta you would always see Lloyd on his swing set waving to any car that drove by.  He would do anything for anyone that asked a favor from him.

He was preceded in death by his parents – John G. Hissong and Beulah (Long) Thomas.

Graveside services will be held at Tilden Cemetery on Saturday, October 2, 2021 at 10:00 a.m. with Pastor Ross Fearing officiating. Military honors will be conducted by the Army National Guard Funeral Honor Detail and the Sparta VFW Post #2698.