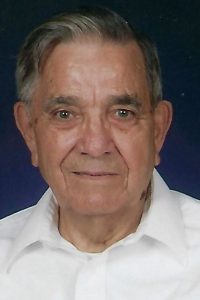 Lenard Chittenden, 93, of Freeburg, IL; formerly of Marissa, IL entered into rest with Jesus on Wednesday, November 8, 2017 at Cedar Trails Senior Living Center in Freeburg, IL. He was born to Lenard and Minnie, nee Clayton, Chittenden on September 16, 1924 in Clarmin, IL. He married Lavinia Rust on August 30, 1946 in Mayfield, KY.

Lenard was a World War II veteran having served in the United States Navy from July 1943 until April 1946. He was a civilian employee of Scott Field Air Force Base where he was the head of maintenance at the base hospital. He retired in 1984. While working at the hospital he was also running his own business-Chittenden Refrigeration Service. After retirement he volunteered for several mission projects and then joined the Illinois Baptist Disaster Relief team. He loved working with his hands and seemed to be able to repair almost anything. He was a member of Winkle Baptist Church and used his skills to help maintain the church building there.

Lenard was preceded in death by his parents and three older brothers. He is survived by his wife of 71 years, his sister Loreta Rains, his four daughters – Lois (Chuck) Sawyer, Carol (Dale) Carter, Rita (Dave) Smith and Betty (Ray) Politsch. Six grandchildren, seven great-grandchildren and several nieces and nephews.

His family would like to express their gratitude to the staff at Cedar Trails for the wonderful care you’ve provided to Mom and Dad. We’ll never forget your kindness. We would also like to thank the people of Vitas Hospice for their support during Dad’s battle with cancer. Thanks also the many people who have surrounded him with prayer.

Memorials may be made to the Winkle Baptist Church

Funeral: Services will be held at Heil-Schuessler Funeral Home in Marissa, IL on Monday, November 13, 2017 at 1:00pm with Pastor Jeff Downard officiating.