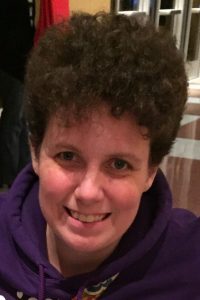 Kristine Michelle Polley, nee Boschert, 41, a child of God, wife, mother, daughter, sister, and friend, was received into the loving arms of her Savior in the early morning hours of February 7, 2017 after a courageous three and a half year fight against brain cancer. She died peacefully surrounded by her husband, children and parents. Although she lost the battle to glioblastoma, her victory in Christ is secure.

Kris was born March 7, 1975, in Kettering, OH and was baptized at St. George’s Episcopal Church in Kettering, OH. At the age of one year, her family moved to the Netherlands. Though she only lived there for a short time, she would return twenty years later to visit her childhood home. At the age of three, her family moved to Mascoutah, IL, where she graduated from Mascoutah Community High School in 1993. She earned her bachelor’s degree with a double major in elementary education and special education from Illinois State University in 1997. She was a member of the Tri-Sigma sorority. Following graduation, she taught special education first in Fairview Heights, IL, and then in Peoria, IL.

On November 18, 2000, she was united in marriage to William John Polley at St. George’s Episcopal Church, Belleville, IL where she had been a member for many years. They made their first home in Washington, IL, and were members of Trinity Lutheran Church in Peoria, IL. Their two children, Zachary and Elizabeth, were born during their years there.

In 2005, Kris and her family moved to Macomb, IL, where she was a member of Immanuel Lutheran Church. She served as a substitute teacher in Macomb before joining the staff at West Prairie High School.

Kris loved teaching because she loved children. Her own son and daughter were her pride and joy. Their activities, soccer and dance, remained an integral part of her life even as her illness made participation more difficult. Her family and friends say that she led with her heart in everything she did. This was true to the end.

Kris was preceded in death by her grandparents.

She is survived by her husband William, her 15 year-old son Zachary, her 13 year-old daughter Elizabeth, all of Macomb; parents, Tom and Marilyn Boschert of Belleville, IL; brother Jeffrey (Deborah) Boschert of Lewisville, TX; as well as her in-laws, uncles, aunts, nieces, nephews, cousins, and many other family and friends.

Memorials may be directed to the Siteman Cancer Center of St. Louis, MO, or Immanuel Lutheran Church of Macomb.

Funeral: Services will be held at Heil-Schuessler Funeral Home in Marissa, IL on Thursday, February 16, 2017 at 11:30am with Rev. Timothy Mueller officiating.