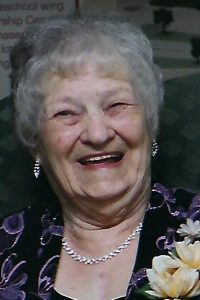 Mrs. Juenger was a homemaker.  She also worked for a time at the New Athens Shoe Factory and as a cook at Senior Manor in Sparta.  She was of the Pentecostal faith.  Kate enjoyed playing cards and camping.

She is survived by her husband – Hubert Juenger whom she married on January 1, 1950.  Her children – Diana (Phillip) Behiter of Swanwick, IL; Rhonda (Miles) Kessler of Tilden, IL; Randy (Jane) Juenger of Pinckneyville, IL.  Eleven grandchildren and nineteen great-grandchildren.  One brother – Fred (Donetta) Risley of Coulterville, IL.  Also survived by numerous nieces and nephews.

Funeral: Services will be held at Heil-Schuessler Funeral Home in Marissa, IL on Thursday, July 26, 2018 at 12:00noon with Rev. Phillip L. Easton officiating.