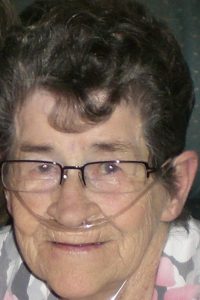 June Frieda, nee Sinn, Juenger, 81, born on September 6th, 1931, formerly of Marissa, Illinois, passed away peacefully on March 27th, 2013 at Chandler Regional Hospital in Arizona. She was one of the identical twin girls born to Alma and Henry Sinn. June lived in Denver with her daughter, Stephanie for the past 23 years but they most recently moved to the Phoenix area to enjoy the warm winters. June also traveled back to Illinois to stay with her son, Jerry, and visit relatives whenever possible.

June’s love and devotion to her family and friends will never be forgotten. Throughout her life, she displayed tremendous courage and strength along with a wonderful sense of humor. She retired after fifteen years as a Walmart People Greeter in Denver and earlier in her life, worked at Reaban’s Restaurant (now Doreen’s) and the old “Railroad Café” in Sparta, Illinois. She was a past member of Friedens United Church of Christ where she was baptized & confirmed and often sang in the choir. “Junebug” loved Cardinal & Rockies baseball, Pinochle, bingo and coin collecting. Always generous & compassionate, she was a faithful contributor to the American Red Cross, Susan G. Komen Foundation and the Denver Rescue Mission.

The family wishes to extend their heartfelt gratitude to the doctors, nurses and technicians that cared for June throughout the years – especially in the dialysis centers where she was receiving treatments for the last year and a half and in Hospice during her final days.

Memorials in honor and celebration of June’s life may be made to the Susan G. Komen Foundation or the American Red Cross.

Funeral: Memorial services will be held at Friedens United Church of Christ in Marissa, IL on Tuesday, April 30, 2013 at 11:00am with Revs. Donald Wagner and Gail Geisel officiating.