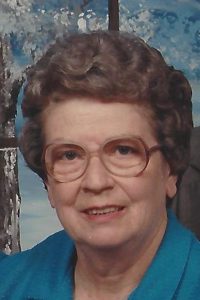 Juanita I. Theobald, nee Short, 95, of New Athens, IL, born August 2, 1922, passed away on Monday, April 16, 2018 at the New Athens Home for the Aged in New Athens, IL. She had been a hairdresser her entire life and retired from the Randolph County Nursing Home in Sparta, IL.

She was preceded in death by her parents; Shannon and Nancy (Houston) Short. and her husband Edgar Theobald, whom she married June 20, 1947 and who passed on October 28, 1976, her brother; Billy Short who died June 27, 1994 and nephew; Jeffrey Short who died April 16, 2002 and by 2 aunts; Margaret Hunter and Elsie Ervin.

In lieu of flowers, memorials are encouraged to be made to The New Athens Home for the Aged.

Memorial service: Services begin at 11 a.m. on Saturday, May 26, 2018 at Heil-Schuessler Funeral Home in New Athens, IL with Rev. John Lukomski officiating. Interment will be at Baldwin City Cemetery in Baldwin, IL.