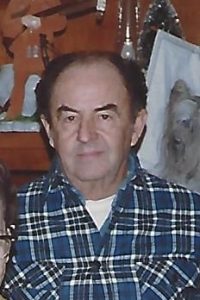 Joseph “Vance” Kosarek, 90, of New Athens, IL, born May 24, 1927 in Oakland City, IN, passed away on Saturday, May 5, 2018 at the New Athens Home for the Aged in New Athens, IL. Mr. Kosarek honorably served his country towards the end of World War 2 as a member of the United States Navy. He was a carpenter by trade working from the Carpenters Local for 60 years and worked for Kosarek Construction in New Athens, IL. Vance loved carpentry, boating, fishing and gardening. He was also an avid animal lover. He adored his pets and frequently made donations to animal groups.

Mr. Kosarek was preceded in death by his parents; Joseph and Ann Gladys (Cotterill) Kosarek, his loving wife;, Marion “June” (nee Fudge) Nagel whom he married on March 24, 1967 at Zion United Church of Christ in New Design, IL and who passed away on February 25, 2003, and his 2 sisters; Eva Jean Kosarek and Barb Henry.

Vance, as he was known by, is survived by his 3 daughters; Judy (Don) Miller, Marilyn (Dean) Schatte and Karen (Rick Miller) Al-Bori all of New Athens, IL, 2 brothers-in-law; Bob Henry of Phoenix, AZ, and Bill Bonewitz of New Athens, IL and 2 sisters-in-law; Mary Catherine Curtis and Soon Barron both of Belleville, IL IL; 10 grandchildren, 10 great grandchildren and 1 great great grandchild.

In lieu of flowers, memorials are encouraged to be made to the New Athens Home for the Aged in New Athens, IL

Visititation: No visitation times are scheduled.

Funeral; A public graveside memorial service will be held at 11 a.m. on Wednesday, May 30, 2018 at Oakridge Cemetery in New Athens, IL with Rev. Dr. Robert Koch officiating.