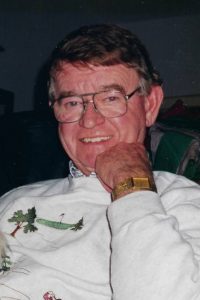 He was a very intelligent man that worked as a building engineer.  John worked at Fermilab in Batavia, IL for sixteen years.  In that time, he designed and created a chair for patients with brain cancer.  He was in the National Geographic magazine for his innovative designs.  After leaving his job at Fermilab, John began his new career as an inventor in Newport News, VA at the Thomas Jefferson National Laboratory.  After retiring, John and Susanne moved to Steeleville, IL and hosted the Apple Butter Festival at their home for ten years.

Memorial contributions may be made to the Alzheimer’s Association.

Visitation: Family and friends may attend on Wednesday, January 13, 2021 at Heil-Schuessler & Sinn Funeral Home in Sparta, IL from 5:00 to 7:00 p.m.  Face masks are required to be worn in accordance with CDC guidelines during the COVID-19 pandemic.

Funeral: Services will be held at Heil-Schuessler & Sinn Funeral Home in Sparta, IL on Wednesday, January 13, 2021 at 7:00 p.m. with Pastor Tim McIntyre officiating.

Interment: Committal services will be held at St. Mary of Lourdes Cemetery in Metamora, IL on Thursday, January 14, 2021 at 2:00 p.m.