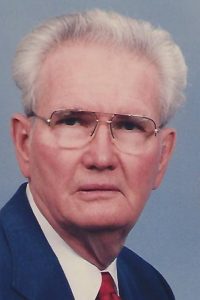 Mr. Steele was a truck driver.  He was a United States Navy Veteran.  John was a member of Westminster Presbyterian Church.  He was also a member of the Randolph County Farm Bureau.  John greatly enjoyed woodworking.

He was preceded in death by his parents – Richard and Elizabeth, nee Carpenter, Steele, his wife Eva Katharine, nee Daniels, Steele whom he married on June 10, 1944 in Dedham, MA and who passed away on March 10, 2010, one son – Dan Steele, five brothers and two sisters.

Funeral: Services will be held at Westminster Presbyterian Church in Sparta, IL on Wednesday, October 10, 2018 at 11:00am with Rev. Robert Miner officiating.

Interment: Burial will be held in the Steeleville Cemetery in Steeleville, IL.