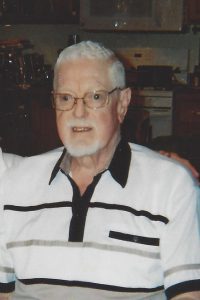 John served two years in the U.S. Army where he pitched for the 4th Armored Division Team in Germany. Upon returning home he was scouted by and went to spring training for the Los Angeles Dodgers. John hurt his arm while pitching in Germany and after 3 weeks at spring training he decided to return home. He was very proud of being inducted into the New Athens High School Hall of Fame for his pitching and basketball ability. John pitched several no-hitters while in high school. In his life time John was a barber, an insurance salesman, an underground coal miner and then went back to barbering from which he retired in 2005. John was an excellent gardener and enjoyed sharing his harvest with everyone. He enjoyed playing pool and being with family and friends. John was always there to lend a helping hand and will be missed by all who loved him.

He was preceded in death by his parents – John H. and Velma, nee Coates, Main. His father and mother-in-law – Wilbur and Alice Nuernberger. A brother – Louis Main. A sister Nancy Darlene in infancy. A brother-in-law – Pete Schwebel and a nephew – John Nuernberger.

“When tomorrow starts without me, please try to understand that an angel came and called my name, and took me by the hand and said my place was ready in heaven far above, and that I’d have to leave behind all those I dearly love. For those left behind, do not mourn. For my journey has ended and my tools have been cleaned and put to rest. For those I left behind, You can see me when the geese gather together to fly south. When Mother Earth prepares for a long winters nap with the first frost I will be there, when you look for the Red Tail and the eagles that come down from the North for the winter. I will be there, in the sun-rise and sunset. In the first flowers of spring and the songs of the birds.”

In lieu of flowers memorials may be made to Hospice of Southern Illinois, New Athens Ambulance Service, St. John United Church of Christ.