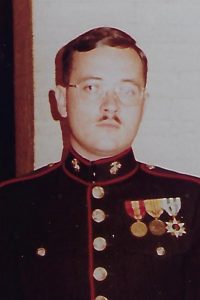 John Eugene Cook, III, 69, of New Athens, born March 19, 1951 in St. Louis, MO passed away on Monday December 28, 2020 at Belleville Memorial Hospital in Belleville, IL. John bravely and honorably served his country.  He voluntarily enlisted to serve two tours of active duty in the Marine Corps during the Vietnam War as a sniper and earned the rank of Sergeant. Following his service as a Marine, he served in the Navy Reserve and Air National Guard. John served the Village of New Athens as a police officer for 20 years, and was previously a paint sales representative for Pittsburgh Paint and Glass (PPG). He was a member of the Disabled Veterans of America and the National Rifle Association.

John was preceded in death by his parents; John E. Cook, II and Catherine (Duvall) Cook, and 1 sister; Mary Georger.

Memorials are encouraged to be made to Disabled Veterans of America or to the Down Syndrome Association of Greater St. Louis.

Private visitation and services are being scheduled. Burial will be at Jefferson Barracks National Cemetery in St. Louis, MO.