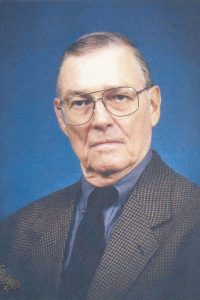 John E. Baker Jr. was born January 11, 1935 to John E. and Carrie (Goeglein) Baker at home in E. St. Louis and passed away October 9, 2013 at his home. He was the eldest of three children. Both parents preceded him in death in 1991. Survived of that family unit are two brothers, Jim (Vicky) Baker of Red Bud, IL and Howard (Maureen) Baker of Cherry Hill, NJ/Sarasota, FL.

He was a past member of the Bridge and Wharf Carpenters Union of both Sidney, New South Wales and Port Fremantle, Western Australia, Pile Drivers Union Local 2119 in St. Louis, MO, Carpenters/Millwrights Union Local 169 in E. St. Louis, IL, having received his 60 year service award. He was also a member of the First Baptist Church of Marissa, IL. After retirement from Kerry Ingredients in 2002 he spent much of his time as a skilled woodworker / furniture maker, gardener, winemaker traveler and genealogist.

“Blessed is the man that walketh not in the counsel of the ungodly, nor standeth in the way of sinners, nor sitteth in the seat of the scornful. But his delight is in the law of the Lord; and in his law doth he meditate day and night. And he shall be like a tree planted by the rivers of water, that bringeth forth his fruit in his season; his leaf also shall not wither; and whatsoever he doeth shall prosper. The ungodly are not so; but are like the chaff which the wind driveth away. Therefore the ungodly shall not stand in the judgment, nor sinners in the congregation of the righteous. For the Lord knoweth the way of the righteous: but the way of the ungodly shall perish.” — Psalm 1

He and Jerry began their eternal search like John Bunyon’s “Pilgrim”, trusting their Maker for direction. In 1971, they arrived at their final destination, buying a farm in Marissa, IL which was an ideal location to raise their family. They are the parents of eight children, John (Pam) Baker III of Marissa, IL, Mary (Scott) Gosnell of Kirkwood, MO, Karen (Hubie) Kruse of Smithton, IL, Karl (Nina) Baker of Hemer, Germany, Diana (Eddie) Kane of Marissa, IL, William (Sharmila) Baker of Libertyville, IL, Elizabeth (Martin) Kehoe of St. Libory, IL and Rebecca (Glenn) Pearl of St. Louis, MO. They have 22 grandchildren, 16 great-grandchildren and 1 great great grandchild.

“He sleeps well, gone but not forgotten
And memory shall never fade,
Loving hearts shall always linger
Where our loving father is laid.
The younger and the old,
The low and the high shall die.
All are away to their dwelling of rest.
Are hidden and lost in the depth of this grave.
We cannot always be together
Last hour must dawn and silence whisper.”

Memorials may be made to the Heartland Hospice.

Funeral: Services will be held at the First Baptist Church in Marissa, IL on Monday, October 14, 2013 at 10:00am with Rev. Homer Hanshaw officiating.