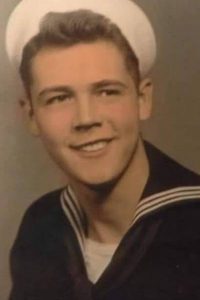 Joe Martin Barber, 87, of Sparta, IL, passed away on January 4, 2022 at the VA Hospital in Tampa, FL, joining his wife of 55 years Shirley (nee Wilson) who preceded him to heaven in 2016.  Joe was born in Sparta on December 23, 1934 in a small house on Walnut Street.  He was the firstborn son of Helen (nee Cheatham) Barber and Martin Orella Barber. Siblings preceding him to heaven are Jane (nee Barber) Bligh, Tommy Barber (infant), Donna Barber (infant).

Joe is survived by two sons, a daughter-in-law, and four grandchildren:  Matthew and daughter Ella Rose, Michael and wife Gretchen, parents of Samuel, Joseph, and Caroline.  Joe is also survived by a sister Anna Lea Barber of Alton, IL.

After graduation from Sparta Township High School in 1952, Joe and four other classmates traveled to St. Louis and enlisted in the US Navy.  Joe served during the Korean War on the USS Cape Esperance, being honorably discharged in December of 1955 after 42 months of service.  Joe then earned a degree from Rankin Technical College in St. Louis and worked in the Stereotype Department at Spartan Printing Company for 30 years, being department manager for 21 years as well as managing other departments before his retirement in 1989.

In his spare time, Joe enjoyed and achieved success with the sport of golf, being club champion many times at the Sparta Country Club, setting the course record unbeaten for many years at six under par four times (29 in nine holes), and having made six holes-in-one during his golf career.  At the age of 67, he achieved his final and sixth hole-in-one, for which he did not receive a trophy as it was unwitnessed.

Joe was a member of VFW #2698, Hope Lodge 162, and Trinity United Presbyterian Church, all in Sparta.

A funeral service for Joe will take place at Heil-Schuessler and Sinn Funeral Home in Sparta, IL on January 15, 2022 at 1:00 pm.  Interment will be at Caledonia Cemetery in Sparta, IL.

Flowers can be supplied through Teri Jean’s Florist in Sparta, IL. In lieu of flowers or plants, please donate to the Sparta VFW #2698 in memorial for Joe M. Barber, Korean War Veteran.