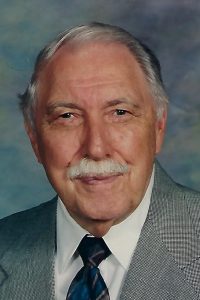 Mr. Church was the owner and operator of Church and Hamilton Insurance Agency and the Marissa Building and Loan. He was a United States Army Air Corp Veteran serving as a navigator and bombardier during both World War II and the Korean War. He also spent 30 years in the Air Force Reserves obtaining the rank of Lieutenant Colonel. He was a member of the Marissa Rotary Club. Mr. Church was a lifelong and very active member of the First Baptist Church of Marissa. Joe and his wife Mary were avid Christian music enthusiasts and often attended Christian music programs. Joe was a humble man and a loving husband, father and grandfather.

The family would like to extend a very heartfelt expression of gratitude for the wonderful care, kindness and love that was provided to Joe by Sycamore Village and Vitas Hospice.

In lieu of flowers memorials may be made to Vitas Hospice.

Funeral: Services will be held at the First Baptist Church in Marissa, IL on Saturday, February 11, 2017 at 10:30am with Rev. Jim Wiens officiating.