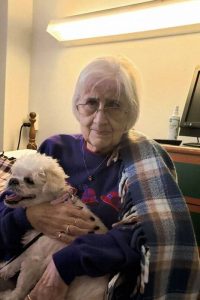 Joan married George Robert  “Bob” Brown on June 15, 1957 in Sparta, IL.  Joan and Bob owned Brown’s Jewelry Store and Fashion Crossroads Clothing Store, which were both located in Sparta.  She was an active member of the Red Hat Society.  Joan and the rest of the Red Hat Society would travel to many different nursing homes and sing to the residents to brighten their day.  She loved animals, especially her dogs.

Memorial Contributions may be made to the Randolph County Humane Society and St. Jude’s Children Research Hospital.

Online condolences may be expressed at www.heilschuessler.com.

Heil – Schuessler & Sinn Funeral Home in Sparta, IL is in charge of arrangements